Carbon dioxide is a clean gaseous agent, in plentiful supply and can be stored in either high pressure cylinders or low pressure tanks. It has been used effectively as a fire extinguishing gas since the early 1900’s.Carbon dioxide continues to be used in numerous applications around the world for the extinguishment of flammable liquid fires, gas fires, electrically energized fires and, to a lesser degree, fires involving ordinary cellulosic materials such as paper and cloth.

Carbon dioxide can effectively suppress fires of most materials with the exception of active metals, metal hydrides, and materials containing their own oxygen source, such as cellulose nitrate. The use of carbon dioxide is limited primarily by the factors influencing its method of application and its intrinsic health hazards.

Flame extinguishment by carbon dioxide is predominantly by a thermophysical mechanism in which reacting gases are prevented from achieving a temperature high enough to maintain the free radical population necessary for sustaining the flame chemistry.

For inert gases presently used as fire suppression agents (argon, nitrogen, carbon dioxide, and mixtures of these), the extinguishing concentration (As measured by the cup burner method (NFPA 2001)) is observed to be linearly related to the heat capacity of the agent-air mixture. 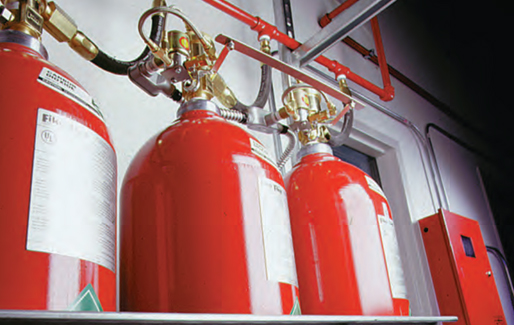 Carbon dioxide is used internationally in marine applications in engine rooms, paint lockers, vehicle transport areas on cargo vessels, and in flammable liquid storage areas. Large marine engine room systems may require as much as 20,000 lb of carbon dioxide per system. Carbon dioxide fire suppression systems are currently being used by the U.S. Navy and in commercial shipping applications.

Contact us
We use cookies to ensure that we give you the best experience on our website. If you continue to use this site we will assume that you agree with our cookie policy.OkRead more